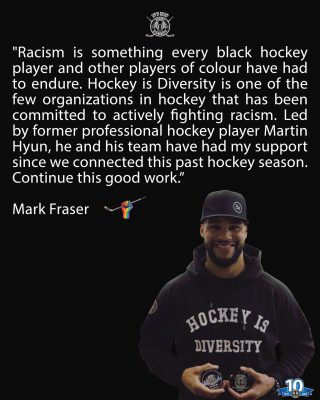 Hockey is Diversity had Mark Fraser Interviewed on racism in hockey and society.

Hockey is Diversity: As one of very few black players who played in the NHL – a sport that is still regarded as „white“ and the League normally not engaging in political activities, they have now with the lead of Evander Kane come out in support against racism. With that visible players and faces of the hockey world like Sidney Crosby and Jonathan Toews have spoken out in support of the movement. What does it mean to you to see the support of the NHL and the many visible players?

Mark Fraser: It means so much to me to have white hockey players and peers speaking up about this issue. Racism in society and in hockey has always been a thing black players experience, but to see white hockey players speaking up about Black Lives Matter and being outraged to see the videos of police brutality against people of colour, has allowed me to find my voice. Having the white community speak up and stand with us in the fight against racism has allowed me to no longer be afraid to speak my truth. It’s allowed me to feel safe that I can use my voice too.

Hockey is Diversity: Sport federations usually condem political statements by players and they want them to „shut up and play“ – but without for example Tommie Smith and John Carlos raising the fist in Mexico in 1968 in a silent protest or Colin Kaepernick taking a knee or the L.A. Clippers players wearing a „I can’t breathe“ shirt during warm-up some things would have not changed. How important is it for athletes to emancipate themselves, to define them first as committed and active citizens and secondly as players and use their platform for political statements?

Mark Fraser: It’s so incredibly important for athletes to use their platform to speak on political issues that are important. In America, the country is divided. Racism is very prevalent. There is a system in place that has been functioning in systemic racism forever. Innocent Black people are being killed, murdered, by police. That is a very real problem that is happening far too often. The only way to change that is from reform. Passing new laws and bills that protect the victims instead of protecting the police when they kill an innocent citizen. People need to become educated. People need to understand the issues and vote to get new Mayors, Police Chiefs, City councilmen, State Senators and Presidents in place that are willing to fix this problem instead of continue to ignore it. If an athlete has the platform to reach millions of people, then they should absolutely speak out for what is right because using their voice can go a very long way in touching a lot of people and helping make the world a better place.

Hockey is Diversity: Structural, economic and covert racism and discrimination and/ or killings against blacks in the US did not end with the Civil Rights Movement or the election of Barack Obama. Despite affirmative action it is still hard for blacks to move up the social ladder and break the glass ceiling of the corporate world. Why is it still so difficult for blacks to simply achieve equal opportunities, the right to life and liberty, the right for equal economic and political opportunities in hindsight to white supremacy?

Mark Fraser: Because in the history of the United States of America, they have always gotten ahead from mistreating black people. From slavery to the Civil War, to the Jim Crow South, the Civil Rights movement today. Blacks have never fully had equal rights. It’s difficult for black people to have equal rights in America because the system has never in it’s history wanted them too. That’s what needs to change. The KKK is still alive and strong in America. The country won’t label them a terrorist group, but the rest of the world looks at the KKK as a ridiculous and absurd group of people whose sole mission is to hate and remove all people of colour from their society. When you live under a government that allows the KKK to still exist in the year 2020, you get your answer to why black people still don’t have equal rights in America. They live under a system that has legislation in place to prevent it from happening.
Hockey is Diversity: What needs to be done politically to achieve equal opportunities for blacks?
Mark Fraser: What needs to be done is people need to get educated. Cities around the world are protesting because of the police brutality in America. So that tells me that the majority of the world knows what is happening in America is wrong. So people need to first learn about the problem. Then they need to understand it’s a systemic problem. To fix that people have to sign petitions. People HAVE TO VOTE for new leaders. Leaders who know what is happening is disgusting, but who aren’t afraid to try to dismantle the old system in order to reform and bring about real change.
Zum Blog
Diese Webseite nutzt Cookies um das Browsing-Erlebnis zu verbessern.
Verstanden
Mehr Infos
Privacy & Cookies Policy
Notwendig immer aktiv