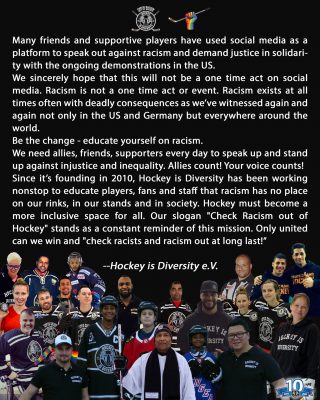 Many friends and supportive players have used social media as a platform to speak out against racism and demand justice in solidarity with the ongoing demonstrations in the US.

We sincerely hope that this will not be a one time act on social media. Racism is not a one time act or event. Racism exists at all times often with deadly consequences as we’ve witnessed again and again not only in the US and Germany but everywhere around the world.

Be the change – educate yourself on racism.

We need allies, friends, supporters every day to speak up and stand up against injustice and inequality. Allies count! Your voice counts!

Since it’s founding in 2010, Hockey is Diversity has been working nonstop to educate players, fans and staff that racism has no place on our rinks, in our stands and in society. Hockey must become a more inclusive space for all. Our slogan „Check Racism out of Hockey“ stands as a constant reminder of this mission. Only united can we win and „check racists and racism out at long last!”

This website uses cookies to improve your experience while you navigate through the website. Out of these, the cookies that are categorized as necessary are stored on your browser as they are essential for the working of basic functionalities of the website. We also use third-party cookies that help us analyze and understand how you use this website. These cookies will be stored in your browser only with your consent. You also have the option to opt-out of these cookies. But opting out of some of these cookies may affect your browsing experience.
Notwendige immer aktiv